Ukraine’s president Volodymyr Zelensky has warned the country “should not lose vigilance” following an announcement from Russia that it would dramatically scale back its military activities near Kyiv.

The Russian comments, which followed a round of peace talks with Ukrainian officials in Istanbul on Tuesday, sent global shares higher on optimism among investors that the negotiations might be gaining traction.

“You saw the news today that the Russian military command allegedly decided to ‘reduce hostilities in the directions of Kyiv and Chernihiv’,” Zelensky said in a late night address on Tuesday.

“We should not lose vigilance. The situation has not become easier. The scale of the challenges has not diminished. The Russian army still has significant potential to continue attacks against our state.”

The apparent Russian pullback, announced by deputy defence minister Alexander Fomin, was the first faint sign of progress towards ending the month-long war, although the Kremlin said on Wednesday it did not see any major breakthroughs in the latest round of talks.

Ukraine and its western allies remained deeply sceptical of President Vladimir Putin’s intentions while Russia was gearing up for a larger assault on the eastern Donbas border region and continued strikes in the south.

“Yes, we can call positive the signals we hear from the negotiating platform. But these signals do not silence the explosion of Russian shells,” said Zelensky, who later referred to a strike in the southern city of Mykolayiv that killed at least eight people on Tuesday.

On Wednesday, authorities in the Donbas said residential areas in Lysychansk, a city in the region, were shelled by “heavy artillery”.

While Kremlin spokesman Dmitry Peskov said there had been no big breakthroughs in Istanbul, he described the fact that Moscow had received written proposals from Kyiv for an agreement as a “positive factor”.

“We can’t state, for now, that there’s been anything very promising or any breakthroughs,” Peskov said, on a phone call with reporters. “There’s a lot more work still to do.” He said the Russian delegation would be meeting with Putin to discuss progress in the peace talks so far.

Though Russia framed its withdrawal in Kyiv and Chernihiv as a trust-building exercise, it appeared to provide a justification for retreats Russian forces had already made in the face of Ukrainian counter-attacks.

The UK defence ministry on Wednesday said units had been forced to return to Russia and Belarus to reorganise and resupply after suffering heavy losses.

It added that Russia’s stated shift of focus to the Donbas was “likely a tacit admission that it is struggling to sustain more than one axis of advance” and warned that Russia was “likely to compensate for its reduced ground manoeuvre capability through mass artillery and missile strikes”.

British defence officials added that Ukrainian forces had fought back against Russian forces north-west of Kyiv, including in Irpin, and that “Russians have been pushed back from a number of positions”.

Joe Biden echoed his Ukrainian counterpart, saying he would not “read anything into” Russia’s decision to scale back its military activities near Kyiv.

“We’ll see if they follow through on what they’re suggesting,” Biden said, speaking at the White House. The US president added that he spoke with the leaders of France, Germany, the UK and Italy on Tuesday, and all agreed that they were open to hearing Russia out. “There seems to be consensus that let’s just see what they have to offer,” Biden said.

As they assessed Russia’s actions, the US and its allies would continue to apply sanctions, provide Ukraine with lethal aid and monitor the diplomatic discussions, he added.

Zelensky said “sanctions must be strengthened. Intensified weekly. And they must be effective” for peace to be achieved. 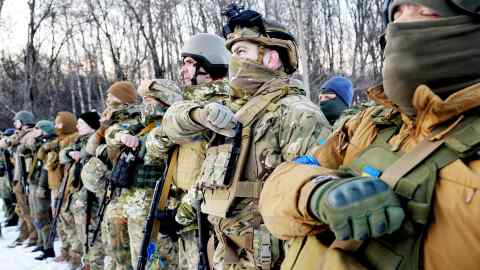 His chief of staff Andriy Ermak said on Wednesday that Ukraine needed “effective weapons, heavy weapons, artillery, anti-aircraft and anti-ship missiles” but “at the same time, we do not stop diplomatic efforts to stop the war”.

Talks are set to resume online after Ukraine formally handed over draft proposals to Russia on Tuesday.

Fomin said the discussions were “entering a practical stage” on the issues of Ukraine’s neutrality and non-nuclear status — two critical Russian demands — in exchange for security guarantees for Ukraine.

Oleksandr Chaly, a member of the Ukrainian delegation, said Ukraine and Russia would continue negotiations for the next two weeks and after that, the “guarantor countries” — the states expected to underwrite Ukraine’s security as part of a settlement — would be able to join.