What you need to know right now By Reuters 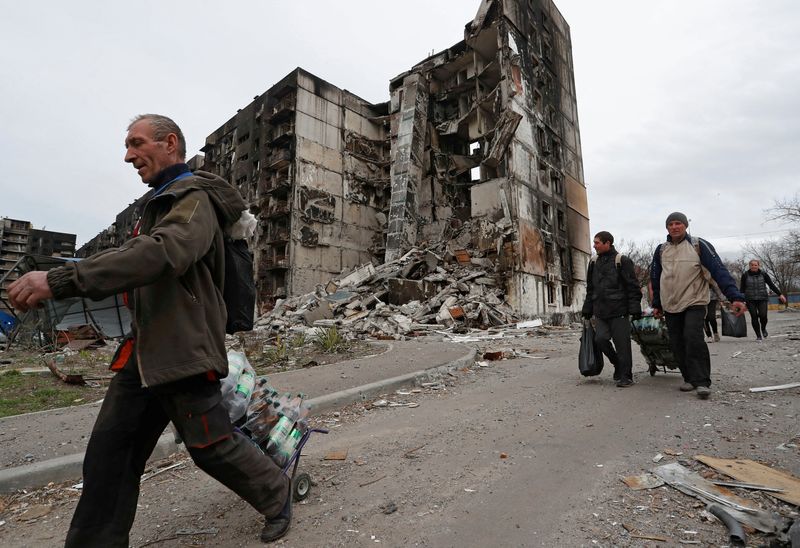 * The Ukrainian human rights ombudswoman said between 150 and 300 bodies may be in a mass grave by a church in the northern town of Bucha, where Ukraine accuses Russian troops of killing civilians.

* Russia called the allegations out of Bucha a “monstrous forgery” aimed at denigrating the Russian army. Russia’s U.N. ambassador told the Security Council Russian troops are not targeting civilians, dismissing accusations of abuse as lies.

* Sobbing uncontrollably, Serhii Lahovskyi nuzzles against the shrouded corpse of his closest childhood friend, who disappeared when Russian troops occupied the Ukrainian town of Bucha near Kyiv and was found shot through the head and dumped in a stairwell.

* The Russian defence ministry says its forces will “liberate” the southeastern port of Mariupol from Ukrainian “nationalists”.

* A Dominica-flagged cargo ship sank in the besieged southern Ukrainian port of Mariupol after being targeted by Russian missile strikes, the vessel’s flag registry said.

* The sanctions to be announced by the United States and its allies on Wednesday will target Russian banks and officials and ban investment in Russia, the White House said, after officials in Washington and Kyiv accused Moscow of committing war crimes in Bucha.

* U.S. chipmaker Intel Corp (NASDAQ:) said it has suspended business operations in Russia, joining a slew of companies to exit the country following its invasion of Ukraine.

* Thousands of auto workers have been furloughed and food prices are soaring as Western sanctions pummel the small Russian city of Kaluga and its flagship foreign carmakers.

* People are still only able to flee Mariupol on foot or by private car as attempts to organise mass evacuations by bus to safer parts of Ukraine have failed, Ukraine’s deputy prime minister said.

* “Every Euro, every cent that you receive from Russia or that you send to Russia has blood, it is bloody money and the blood of this money is Ukrainian blood,” Kyiv mayor Vitali Klitschko said.

“The challenge is internal, first of all, one’s own, human challenge,” Zelenskiy said of considering negotiations with Russia. “Then, when you pull yourself together, and you have to do it, I think that we have no other choice.”