Ukraine claims Russian forces driven back ahead of ceasefire talks

Ukraine claimed it had driven out Russian forces from some key areas around its capital Kyiv and the country’s north-east, as fierce fighting set the backdrop for the first face-to-face ceasefire talks in almost a fortnight.

Volodymyr Zelensky, the Ukrainian president, used a late-night address on Monday to praise his forces retaking Irpin, a suburb of Kyiv and an important gateway to the capital, the latest in a series of counter attacks that pushed back Russian forces.

“The occupiers are pushed away from Irpin. Pushed away from Kyiv,” Zelensky said. “However, it is too early to talk about security in this part of our region. The fighting continues. Russian troops control the north of Kyiv, have the resources and manpower.”

While Ukraine’s precise gains have not been independently verified, the UK said Zelensky’s forces had made progress in “localised counter attacks” to the north-west of Kyiv, including at Irpin, Bucha and Hostomel. “These attacks have had some success and the Russians have been pushed back from a number of positions,” said the Ministry of Defence in an intelligence update on Tuesday.

Zelensky’s remarks came as Russian and Ukrainian envoys gathered in Istanbul for the fourth round of talks to end the war in Ukraine. While negotiators have sketched the outlines of a potential ceasefire and moves towards a political settlement, diplomats in Kyiv, Moscow and the west say they remain sceptical about any imminent breakthrough.

The two sides are discussing a pause in hostilities and humanitarian corridors as part of a possible deal that would involve Ukraine abandoning its drive for Nato membership in exchange for security guarantees and the prospect of joining the EU, according to people familiar with the talks.

With Russia’s month-long ground offensive largely stalled, Moscow has signalled its willingness to pull back from some of its most difficult initial demands. But Ukraine and its western backers fear Russian president Vladimir Putin may be using the talks as a ruse to resupply his forces in preparation for a fresh offensive.

Draft ceasefire documents do not include reference to “denazification”, “demilitarisation” and legal protection for the Russian language in Ukraine, according to four people briefed on the discussions. Moscow is also prepared to let Kyiv join the EU if it remains militarily non-aligned, the people said.

David Arakhamia, head of Zelensky’s party in parliament and a member of Kyiv’s negotiating team, told the FT the parties were close to agreement on the security guarantees and Ukraine’s EU bid but urged caution about prospects for a breakthrough.

“All the issues” have been “on the table since the beginning” of negotiations, he said, but cautioned that there were “lots of points — like in every single item there are unresolved points”.

With the war in its second month, Russia has increasingly concentrated on making advances in the east, aiming to envelop Ukrainian forces there while throwing troops into the grinding battle for the port city of Mariupol on the Sea of Azov.

Zelensky chided European countries on Tuesday for still financing Putin’s war through purchases of Russian oil, saying it was pointless to hold back further sanctions until more deadly weapons might be used.

“Doesn’t everything that the Russian military is doing and has already done deserve an oil embargo?” he said.

In addition to the counter attacks around Kyiv, Ukraine claimed battlefield momentum in the Sumy region north-west of its second city Kharkiv, and near the city of Izyum in the east, claiming to retake the settlements of Kamyanka and Topolske. Ukrainian forces are also making advances in the southern Kherson region.

Most of the territorial gains are limited in scale and cannot be independently verified. But as well as the UK noting Ukraine had “some success” around Kyiv, the Pentagon on Monday confirmed Ukrainian forces had recaptured the town of Trostyanets, north-west of Kharkiv.

Vadym Denysenko, an adviser to Ukraine’s interior minister, said on Tuesday that although Ukrainian forces were “pushing the enemy back a little”, Kyiv “still remains one of the main goals of this war for Putin”.

If confirmed, the recapture of Irpin would mark a significant moment for Ukraine’s forces, since the suburb north of Kyiv has been the scene of heavy fighting since the war began. 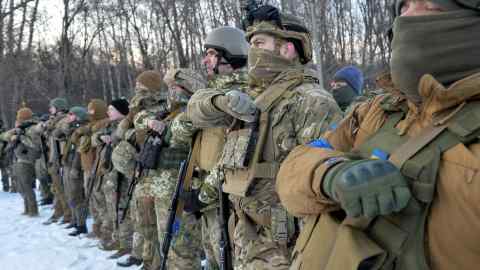 In an update on operations on Tuesday, Ukraine’s military claimed Russia’s troops were “weakened” and “disoriented”, with some units cut off from supply lines and the main forces. It said Russia was resorting to “indiscriminate artillery fire and rocket-bomb attacks” to offset the “decline in the combat potential of enemy units”.

According to a UK intelligence briefing, the Wagner Group, the private military organisation whose mercenaries have fought in Ukraine and Syria and are established in Mali and the Central African Republic, has been “deployed to eastern Ukraine” and is expected to send more than 1,000 fighters.

“Due to heavy losses and a largely stalled invasion, Russia has likely been forced to reprioritise Wagner personnel for Ukraine at the expense of operations in Africa and Syria,” it said.

Through fierce street-by-street fighting, mainly against the battle-hardened Azov troopers, Russian troops are continuing to advance on the centre of the devastated port of Mariupol, which Ukraine claimed remained under its control.

Mariupol’s mayor Vadym Boichenko told CNN on Monday that 160,000 people remained in the city, where “it is impossible to live because there is no water, no electricity, no heat”. “It’s really scary,” said Boichenko, adding: “We need a complete evacuation from Mariupol.”