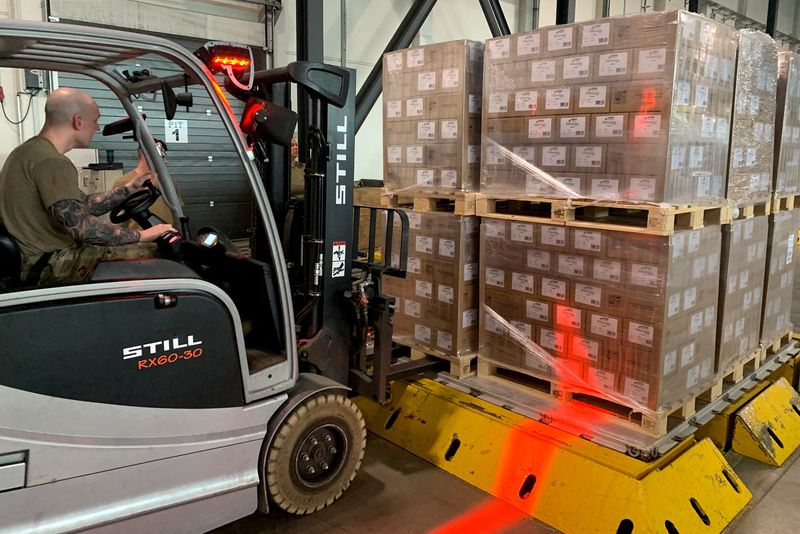 © Reuters. FILE PHOTO: Soldiers load up boxes of baby formula ready for first shipments to U.S from Europe at Ramstein U.S. army base, Germany, May 21, 2022, to attempt to combat a critical shortage in the U.S. REUTERS/Erol Dogrudogan

(Reuters) – State officials and manufacuturers are working out whether baby formula imported from outside the United States to address severe supply shortages will be available to families who rely on government discounts to make it affordable, a U.S. Department of Agriculture (USDA) official said on Tuesday.

Infants enrolled in the Special Supplemental Nutrition Program for Women, Infants, and Children (WIC) program for low-income families consumed about 56% of all infant formula in the United States in 2018, according to available USDA data.

About 1.71 million infants were enrolled in the program in 2018 – less than half of all U.S. infants – according to USDA, which administers the program.

Whether the imported formula will be made available to WIC participants is “an emerging question,” said Brian Dittmeier, senior director of public policy at the National Women, Infants and Children Association.

WIC shoppers are typically limited to buying formula from the company that has a contract with their state, territory, or tribal organization, unless prescribed a specialty formula by a doctor. Those companies provide rebates to cut the cost of formula to WIC shoppers.

Abbott has said it will honor rebates even if shoppers buy competing formulas. Nestle and Reckitt did not immediately respond to requests for comment on whether they too would pay those rebates.

The first shipment from Europe on Sunday in Operation Fly Formula – the Biden administration’s effort to offset the shortage with imports – was of specialty formulas that will be available to eligible WIC infants, a USDA official said.

Whether future imports of non-specialty formula are available to WIC infants will be decided by states and their contracted formula provider, the official said.

The United States ordinarily produces about 98% of the formula it consumes domestically, according to the White House.