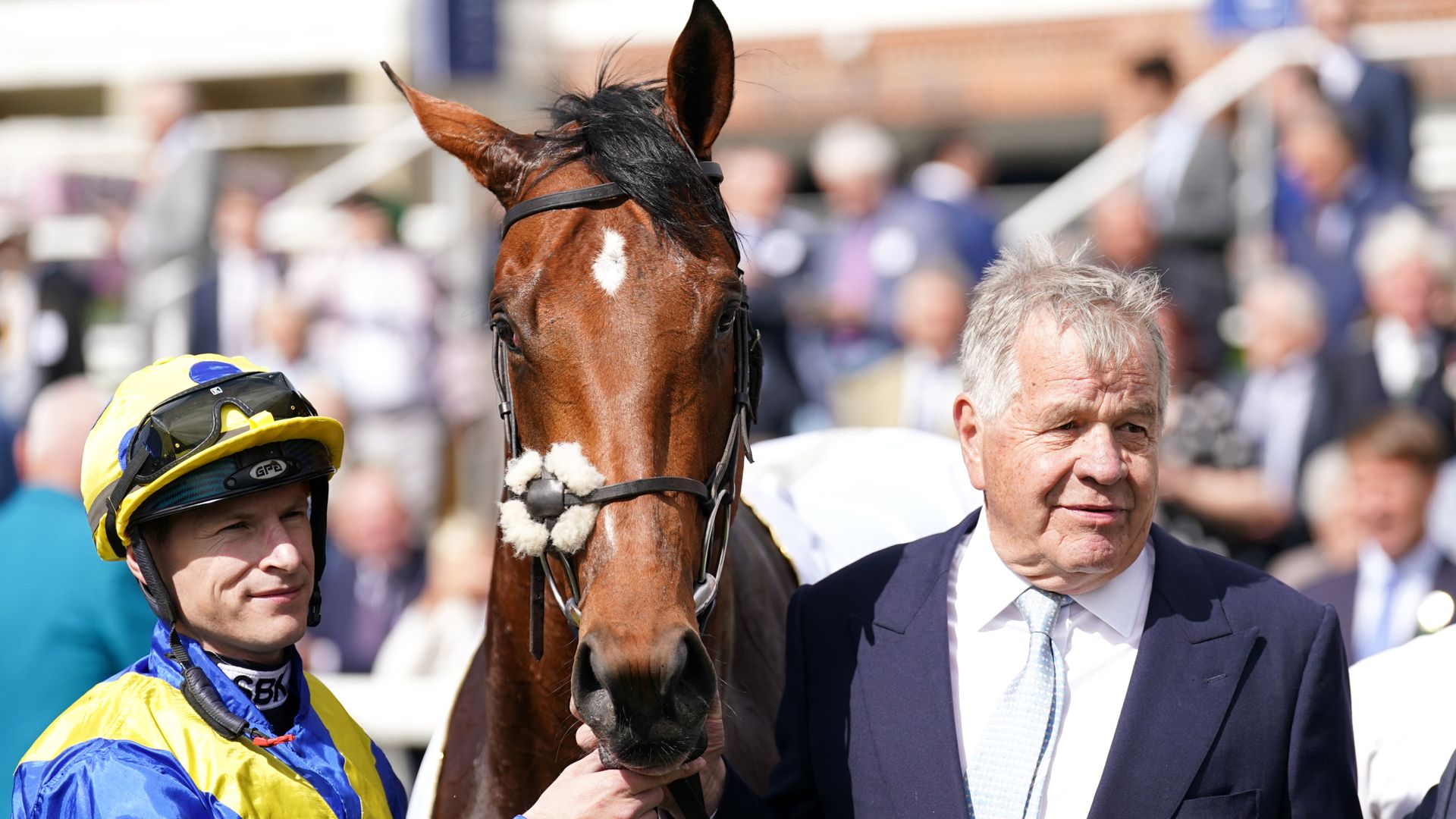 Sir Michael Stoute insists Cazoo Derby favourite Desert Crown will not have to find much improvement from his Dante success to win the Epsom Classic.

The son of Nathaniel is one of the least experienced runners he has saddled in the showpiece, having had just two runs – an easy debut win at Nottingham in November and another on his return last month, when powering to victory at York.

The Newmarket handler, who has won the Derby on five occasions – the last coming in 2010 with Workforce – admits he would like to have given the colt, who suffered a setback that delayed his three-year-old debut, a little more experience.

“We went to York just in time,” said Stoute. “When he won at Nottingham, he won it and won it impressively, which surprised us last year.

“So, he obviously does a little bit more on the racecourse than he does here (at home).”

Though he suffered an interrupted preparation, Desert Crown showed an impressive turn of foot to score in the extended 10-furlong contest on the Knavesmire and is currently the 2-1 favourite with Coral for the 12-furlong Classic on June 4.

Reflecting on that run, Stoute said: “You couldn’t fault the Dante performance, which was very efficient.

“I certainly wasn’t confident going into the Dante, as I felt we were just about ready to go to the races, but I knew that he did more on the racecourse than at home, as he indicated that as a two-year-old on his only start.

“He has had just one piece of work since the Dante. It was just a loosen up, really. He went six furlongs quite comfortably.

“He would not have to come on too much (from the Dante), but it was a good performance that puts him in the reckoning.

“He did surprise me and he impressed me. It was a solid performance in a good time.”

Stoute added: “If you win the Dante, you don’t have to improve too much more to win the Derby.”

Ryan Moore, who rode Workforce to success for Stoute, is still a regular rider for the Freemason Lodge handler, but will likely partner second favourite Stone Age, winner of the Leopardstown Derby Trial, for Aidan O’Brien.

Richard Kingscote will come in for only his second ride in the Derby, maintaining his partnership with the Saeed Suhail-owned Desert Crown, whose colours were carried to victory by the Stoute-trained Kris Kin in 2003.

Kingscote has become a firm favourite, riding plenty of winners for the yard and Stoute confirmed: “Richard Kingscote will ride. He is a good rider. I like working with him. He is very professional. He is a talented rider, very professional and very astute. Sometimes he is better than others – like us!

“Ryan still rides the majority of them, but Richard has ridden him plenty of work, won twice on him and gets on well with him.

“My owner is quite happy to have him on and I am, so we will go that route.”

He added: “It is nothing new for Ryan, riding against us. He has been doing it for years, riding O’Brien’s horses in important races against us sometimes. That is his first port of call.

“He makes a big contribution here, riding work and race-riding when he can after Aidan’s commitments.”

Stoute won his first Derby at the age of 35, when the legendary Shergar routed his opponents by 10 lengths in 1981.

He is 76 now and well into the autumn of his career. He suffered a major personal loss in August 2020 when his long-time partner, Coral Pritchard-Gordon, died, and he has rarely been seen on a racecourse in recent times.

Yet the cricket-mad trainer plays a straight bat to any thoughts of retirement, despite numbers of horses diminishing from 165 when he had two yards, to 100 now.

He admitted: “Of course I think about her. I miss her greatly. She was a great contributor. Coral is greatly missed by many and had a huge impact.”

Despite his advancing years, Stoute is still revered by peers and public alike. Class remains permanent, as do the nerves.

The pressures of having a big-race runner may be the same as saddling “a machine” like Shergar, he admits.

“You are uptight with horses going into any big race. The Derby gets so much publicity. After a while you are a bit calmer than you were hitherto,” he said.

“So, I may seem a bit more chilled out – well, I could be pretending very well, couldn’t I?

“I can’t remember if I sat down and thought, I don’t know if I will ever win the Derby again – you just move on and you train what you have got. You can get surprises, you can get disappointments.”

Asked if Desert Crown had given him a boost, he added: “I’ll let you know after the race! All good horses are important and it is nice to have him and it has given the yard a lift.”