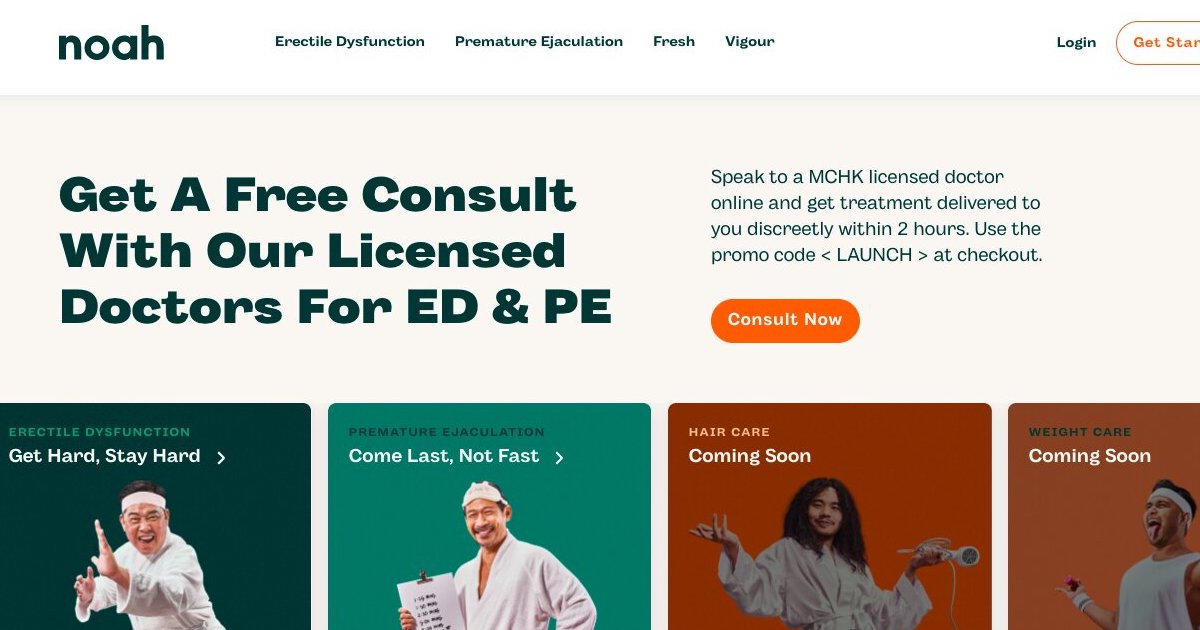 Noah is a telehealth service focused on men’s sexual health. It offers a discreet and simplified process of seeking guidance and treatment for men’s health-related issues, such as erectile dysfunction (ED) and premature ejaculation (PE). Users first have to fill out an online evaluation form before getting booked for a virtual consultation with a registered medical professional. The platform also offers fast delivery of prescription medicines in ​​nondescript packages.

Two years after its launch in Singapore, Noah is expanding its footprint across Asia by way of Hong Kong. The company noted from a study that about 63% of men in Hong Kong deal with ED or PE. They, however, remained “highly stigmatised” for seeking treatment despite the prevalence of such issues.

“We want to make men’s treatment accessible in Hong Kong and get patients treatment that works. It’s about giving men the confidence to speak to a doctor, getting them the right help and finding a truly effective solution,” said Sean Low, founder of Noah.

Noah found that seven in 10 of their patients are seeking advice for their sensitive concerns for the first time. Since it opened, over 30,000 clients in Singapore have joined the platform.

“Just one year after our launch, Noah has grown to become Singapore’s largest telehealth service and we are now aiming to bring this service to cities around the region with Hong Kong as the starting point,” Low said.

Last year, He Health, the online clinic for men by Chinese dating app Blued operator Blue City, received its license to run from the Chinese government. The platform began by promoting men’s health and HIV prevention awareness and has since expanded to men’s daily wellness. It is also offering delivery of post-exposure prophylaxis medicine in around 100 locations in the country. The online men’s health market in China is projected to reach $15.2 million by 2025, according to a report by Frost and Sullivan.