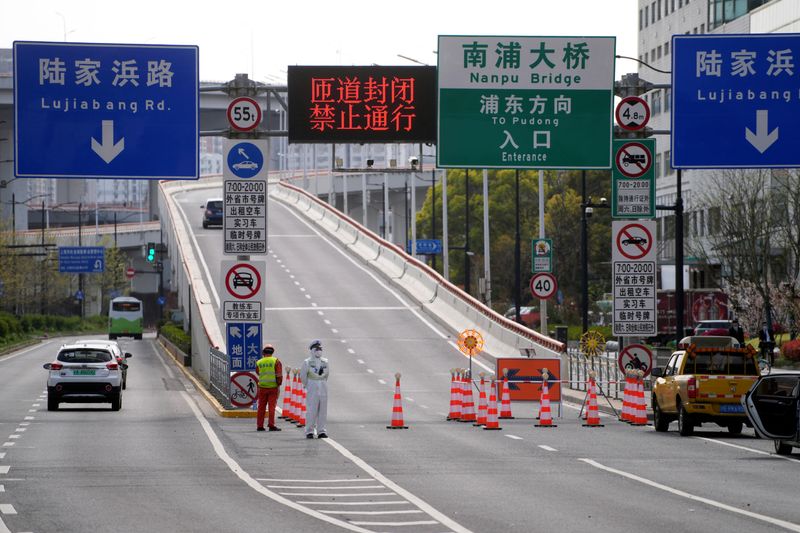 © Reuters. A police officer in a protective suit keeps watch next to a bridge leading to the Pudong area across the Huangpu river, after traffic restrictions amid the lockdown to contain the spread of the coronavirus disease (COVID-19) in Shanghai, China March 28, 2

By David Stanway and Brenda Goh

SHANGHAI (Reuters) -China’s most populous city tightened the first phase of a two-stage COVID-19 lockdown on Tuesday, asking some residents to stay indoors unless they are getting tested as the number of new daily cases exceeded 4,400.

The financial hub of Shanghai, home to 26 million people, is in its second day of a lockdown authorities are imposing by dividing the city roughly along the Huangpu River, splitting the historic centre from the eastern financial and industrial district of Pudong to allow for staggered testing.

While Shanghai’s caseload remains modest by global standards – a record 4,381 asymptomatic cases and 96 symptomatic cases for Monday – the city has become a testing ground for China’s “zero-COVID” strategy as it tries to bring the highly infectious Omicron variant under control.

Residents east of the Huangpu were locked down in their housing compounds on Monday but were mostly allowed to roam within them. On Tuesday, however, three residents told Reuters neighbourhood committees had told them they were no longer allowed to step outside their homes.

“Children were still having picnics yesterday and having fun,” said one of them, who declined to be identified, citing privacy concerns.

Wu Qianyu, an official with the municipal health commission, told a briefing that a “clear request” had been made to residents not to leave their apartments, even to take pets for a walk or throw out trash, during “a key stage in nucleic acid testing”.

She said 8.26 million tests were performed by as many as 17,000 testing personnel in the city’s locked-down districts on Monday.

“The vast numbers of medical staff, grass-roots cadres, community workers and volunteers shared the very hard work on the front line of epidemic prevention and control, and should be thanked,” Wu said.

There were growing signs of frustration on China’s social media and dozens of residents flocked to the Weibo (NASDAQ:) platform to seek help for relatives, with some struggling to access medical services.

Though China is sticking to its plan for crushing the outbreak, experts overseas remain sceptical about the efficacy of lockdowns in the face of a highly infectious new variant.

“It is clear from Australia and elsewhere in the world that lockdowns are simply not effective against Omicron – so expect a big wave coming,” said Adrian Esterman, an expert in biostatistics at the University of South Australia.

Drone footage published by state media showed empty streets below the skyscrapers of the city’s Lujiazui financial district. Public transport in the east has been shut and all unapproved vehicles ordered off the streets.

The Shanghai Stock Exchange, in the west of the city, said it has kept a skeleton staff in place in the bourse for key operations while others work from home.

Residents in the west of the city have been stocking up at shops and markets in anticipation of their lockdown from April 1.

But U.S. hypermarket chain Costco Wholesale Corp (NASDAQ:), whose Shanghai store has in recent days attracted throngs of shoppers, said it was closing from Tuesday, along with some gyms and shopping malls also in western districts.

The city government rolled out new measures to try to support COVID-affected businesses, including rent exemptions and tax rebates.

The Communist Party tabloid the Global Times quoted Peking University economist Cao Heping as saying that while the city’s growth would be hit, the national economy would not suffer greatly.

Elsewhere, the city of Changchun, capital of Jilin province in the northeast, apologised to its 8.5 million residents for food shortages related to disruption caused by containment measures.

The manufacturing hub of Shenzhen is starting to get back on its feet after shutdowns but many firms are worried about the near-term outlook, the Securities Times reported.