Prospects of a consumption-led recovery, however, are clouded by uncertainties around the Omicron variant.

Japan’s retail sales rose faster than expected in November, thanks to decreasing COVID-19 cases in the month, which have encouraged shoppers to ramp up spending on goods and services.

To support the economy, the government on Friday approved a record $940bn budget for fiscal 2022, including cash payouts to families and businesses hit by the pandemic.

Prospects of a consumption-led recovery, however, are clouded by uncertainties around the new Omicron coronavirus variant, which started to spread in the community last week in Japan’s largest cities.

The government said last Thursday it was not considering immediate changes to domestic COVID-19 restrictions due to the new variant.

“But if new infections jump…there is a risk, or a likelihood at this point, that consumption will be suppressed by the Omicron,” Koike said, adding returning travellers during the holiday season could spread infections. 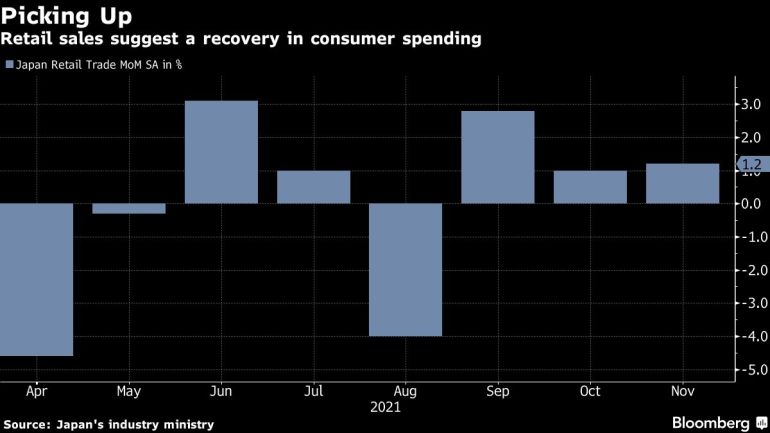 Retail sales gained 1.9 percent in November from a year earlier, government data showed on Monday, faster than economists’ median forecast for a 1.7 percent gain and the 0.9 percent advance in October.

Fuel sales rose 29.2 percent in November from a year earlier, thanks to soaring commodity prices, pushing up the overall retail trend. Car sales fell 14.1 percent due to supply bottlenecks, and electronics sales declined 10.6 percent with diminishing demand for stay-at-home appliances.

Compared with the previous month, retail sales increased 1.2 percent in November on a seasonally adjusted basis, after a downwardly revised 1 percent rise in October.

After the government lifted pandemic-related curbs in September, nationwide daily COVID-19 cases in Japan fell to fewer than one per million people earlier this month.

No restrictions have been reinstated, other than stricter border controls to stop the spread of the new Omicron variant.

The world’s third-largest economy is set to rebound by an annualised 6.1 percent in the current quarter from a 3.6 percent slump in July-September, according to the latest Reuters news agency poll of economists.