Eddie Howe’s side dominated at St James’ Park with Wolves delivering a sub-par performance, but had to wait until the 72nd minute until they got their breakthrough as Wood sent Wolves goalkeeper Jose Sa the wrong way from the penalty spot. 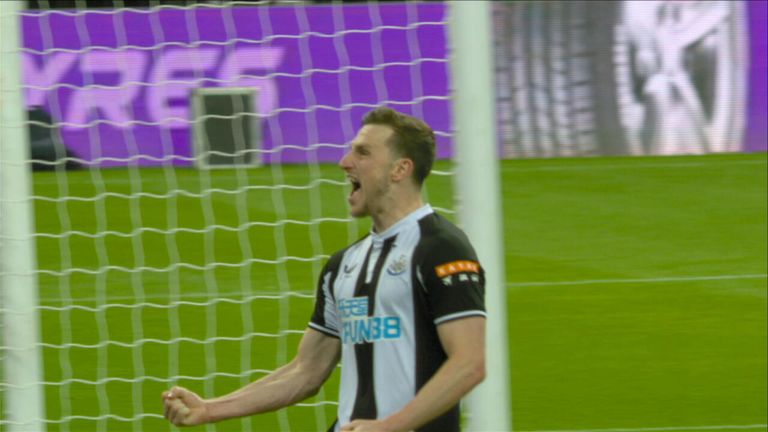 Wood won the spot-kick after cleverly waiting for contact from the onrushing Sa before scoring his first goal at St James’ Park since his £25m move from Burnley in January.

Wood thought he had scored after 23 minutes – bundling the ball in from close range following some calamitous defending from Willy Boly and Jonny Otto – but VAR later ruled the goal out for an offside on Bruno Guimaraes in the build-up. 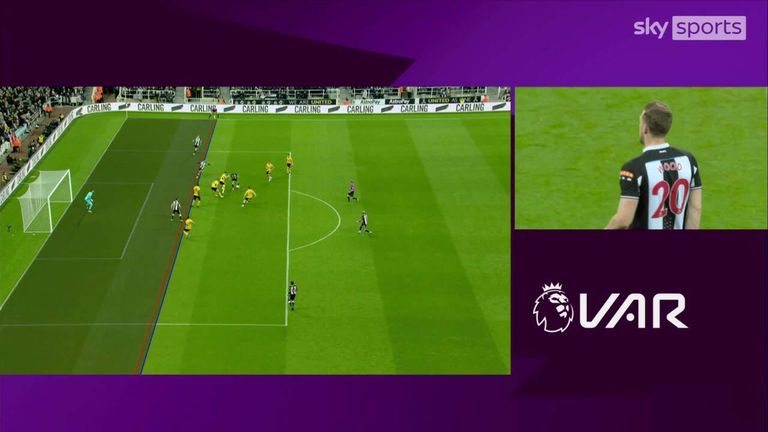 Chris Wood’s opening goal for Newcastle was ruled out after VAR found Miguel Almiron to be offside in the build up.

The only negative for Newcastle was an apparent muscle injury for Ryan Fraser, who was forced off after 12 minutes with Miguel Almiron coming on in his place.

Man of the match: Bruno Guimaraes.

The result ends a three-game losing run for the Magpies, who took a big step towards securing their Premier League safety with a fine performance on their first return to St James’ Park for over a month.

“It’s getting closer,” Wood told Sky Sports when asked about Newcastle’s safety. “It’s a very nice position to be in.”

Wolves failed to register a shot on target until the 81st minute – finishing the game with two – as they missed the chance to move up to sixth and to within two points of fourth-placed Tottenham. They remain eighth, two points adrift of Manchester United and West Ham above them.

“That is any lingering hope of Champions League football out the window,” former Wolves striker Don Goodman said on Sky Sports commentary. “They haven’t deserved it, they’ve been really poor.”

Man of the Match: Bruno Guimaraes

“Bruno Guimaraes has literally been everywhere. Carried the ball, tackled, made good passes, interceptions, ticked every box. He’s been brilliant.”

“Bruno Guimaraes is going to be a mainstay of the team. The difficulty is that we went on that winning run, and it was difficult to break the midfield up. He got his opportunity today and I thought he was excellent. He offered a different dimension. I am excited by what he can bring to the team.”

Howe: A massive step forward, but work to do 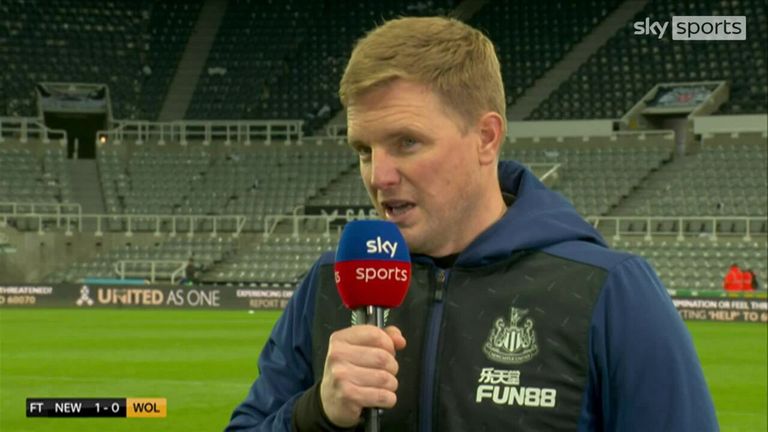 Newcastle United head coach Eddie Howe refused to accept that his side are safe from relegation after their 1-0 win against Wolves.

“Massive tonight. It was the kind of game we expected it to be. Wolves make it difficult for you. We had our moments. It took a penalty to win the game but the players gave everything again.

“I am so pleased for Chris Wood. You could see him filling in on the left of midfield. He is a willing lad. The goal will do wonders for him. I am pleased he stepped up and took it.

“We still have work to do but that was a massive step forward tonight. It brings us closer to safety. I hope there will be a different Newcastle in the future but we have to play a certain way to get results at the moment.”

Wood: We need 40 points for safety

“It is fantastic. There is something about playing in front of St James’ Park and we want to get them up for it. Luckily today we did.

“It helps when you play those teams you do well against. It is always good to score as a striker but ultimately we need points to get out of relegation battle and to build next season. It is getting closer. We want this club to go to the next level. We need to get to 40 points and then build.”

Lage: It’s frustrating, we need to be more aggressive 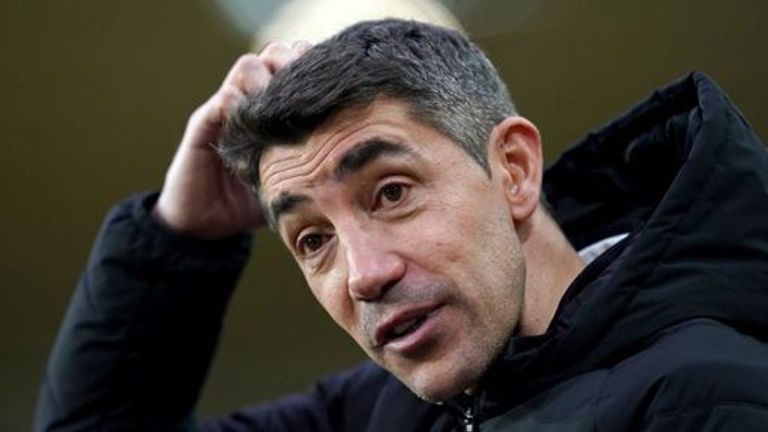 Wolves head coach Bruno Lage was left frustrated after his side struggled to create chances in their 1-0 defeat at Newcastle.

“In the first half, I think we controlled the game with and without the ball. We know how dangerous Newcastle can be with the runs in behind but we controlled that. But we weren’t aggressive and we didn’t create our chances. We were the better side in the second half. I think within the first five minutes we created more than in the whole first half.

“I don’t know if there is a team with more penalties against than us. We lost the ball before, it’s not the first time and I think it’s maybe six or seven penalties inside our box and 1-0 for them. After that we continued to play our game, we created two good chances but didn’t score. I think it was a big opportunity for us that we missed, because if we played the full game like we did in the second half maybe the result would have been different.

“Since the first minute, we need to control the game with the ball and not be defending so much. We need to be more aggressive, not making fouls but being near the man. If you look at the goal, they win the ball and in two passes they’re inside of our box. So it’s frustrating but we need to continue to work. That’s our mentality and we need to learn and improve.”

Newcastle have bright future with Guimaraes

“He’s a class act,” Jamie Carragher said of Bruno Guimaraes after he produced a man-of-the-match display in Newcastle’s 1-0 win over Wolves on Friday Night Football. The more the Brazilian plays, the more there is to admire about him.

On his first home Premier League start for the Magpies since arriving from Lyon for £40m in January, the midfielder oozed quality from the first minute at St James’ Park before he left the pitch to a standing ovation shortly before the final whistle.

The 24-year-old’s exquisite backheel volley against Southampton last month showed he possesses world-class attributes and he proved once again why Newcastle made him their most expensive signing so far under new ownership.

Completing 37 of 41 passes, winning possession seven times and making four tackles, it was a dominant performance against a Wolves outfit who went into the game still with an outside chance of qualifying for next season’s Champions League.

Newcastle boss Eddie Howe told Sky Sports Guimaraes gives his side a “different dimension”. His South American flair does exactly that, but he also has a strong work ethic to match.

Despite last weekend’s 5-1 defeat at Tottenham, Newcastle have been transformed under Howe and are now 10 points clear of the relegation zone. They are almost certain to become the first team to avoid the drop after failing to win any of their first 14 games.

With safety almost secured, they can now afford to have one eye on building towards what they hope will be an exciting future. Guimaraes is certain to play a starring role.

Woeful Wolves’ CL bid goes out with a whimper

Bruno Lage described Wolves’ 1-0 defeat to Newcastle on Friday Night Football as an opportunity missed for his side in their push for European football and it is hard to disagree with him.

It was an abysmal first-half display, which Sky Sports pundit Jamie Carragher said could only go better after the break, but there was just a slight improvement in the second 45 minutes.

Wolves’ approach to sit back and soak up the Newcastle pressure worked for large parts of the first half, but they offered nothing going forward and failed to register a single shot on target until the 81st minute.

The absences of Ruben Neves and Leander Dendoncker were sorely felt in midfield with teenager Luke Cundle, making just his second Premier League start, struggling to get to grips with the game as Newcastle’s £40m January signing Bruno Guimaraes ran riot.

It’s a case of ‘what if’ again for Wolves fans, who will be wondering why their team failed to turn up at St James’ Park when a win would have moved them to within two points of fourth-placed Tottenham and up to sixth, albeit momentarily.

Wolves don’t have a fixture next weekend due to Manchester City’s participation in the FA Cup semi-finals, and are next scheduled to be in action at Burnley on Sunday April 24 at 2pm.