Mikaela Mayer believes she has “hit another level” as she prepares to defend her WBO and IBF super-featherweight titles against former world champion Jennifer Han.

Mayer added the IBF belt to her WBO title with a thrilling points win over Maiva Hamadouche last November, while Han lost on points in her last fight against Olympic gold medallist and undisputed lightweight world champion Katie Taylor.

Mayer, who has just signed a new multi-year contract extension with Top Rank, expects both herself and Han to be at their sharpest when it matters this weekend. The fight is live on Sky Sports Action in the early hours of Sunday morning from 2am.

“I think we’re both going to be stronger and sharper going into Saturday night,” Mayer said.

“Training for this fight, I’ve started to hit another level from all of the work that I did for the Hamadouche fight and I expect that she [Han] feels the same way.

“When you prepare for someone like Taylor and me coming off Hamadouche, you jump up another level. Sometimes, what you’ve worked on during that camp doesn’t really come to fruition until the next fight. I’ve noticed that a lot.”

Mayer also holds the Ring Magazine title for her division. She is eager for unification bouts with WBA champion Hyun Mi Choi and WBC belt holder Alycia Baumgardner and is confident they will come to fruition.

“If the girls want these belts, want the fights they say and are who they say they are, then they will want to fight with me,” Mayer said.

“I’m sitting here with the hardware [belts] that everybody wants, so there’s no reason why these fights shouldn’t happen this year.

“I feel like I’m in my prime and I don’t want to sit around. There are so many girls I want to challenge myself against at 130lbs, 135lbs and maybe even 140lbs. So, there’s no reason why these fights shouldn’t get done this year.”

‘I will show my boxing IQ’

Mayer has also made it clear that her boxing IQ will be on show inside of the ring in Costa Mesa and that she intends to vary her style against Han.

“One thing I pride myself on is I think I’m a very versatile boxer, one of the most versatile out there I think,” Mayer said.

“I can do a lot of different things and people finally saw that when they saw me bang it out for 10 rounds with Hamadouche. I’m tall and lean, so people always expect me to box, but I’m versatile – I can do it all. 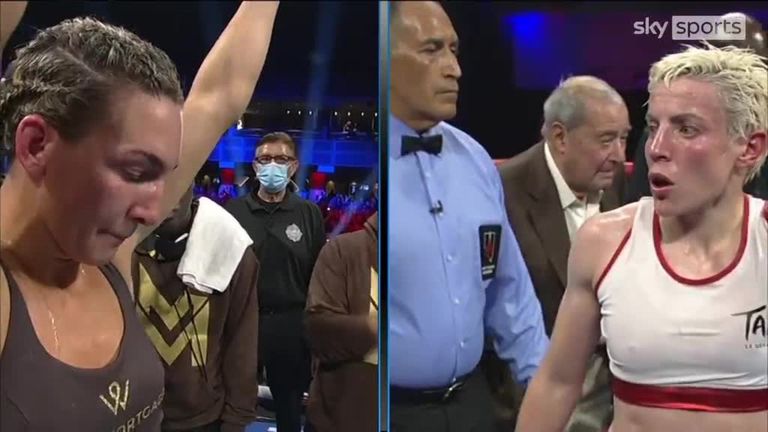 Han, who returned to the ring just six months after giving birth for her fight against Taylor, believes she’s now back to full fitness.

“Women are amazing. Our bodies change and to give birth to a human and bounce back to your pre-pregnancy self is an amazing process,” Han said.

“I didn’t have enough time to get back to my pre-pregnancy self and yet I did what I did [against Taylor]. I’ve [now] had time. I’m ready, I’m prepared and this fight is the perfect opportunity.”

Mayer’s fight for equality in boxing

Prior to the weekend’s fight, Mayer announced a new multi-year contract extension with Top Rank and the fighter believes it highlights a great accomplishment in her bid for equality in the sport.

“Ever since I walked into the gym 14 years ago, I’ve been fighting for a place for women in this sport and to prove that we’re a powerful force in the sport of boxing,” Mayer said. 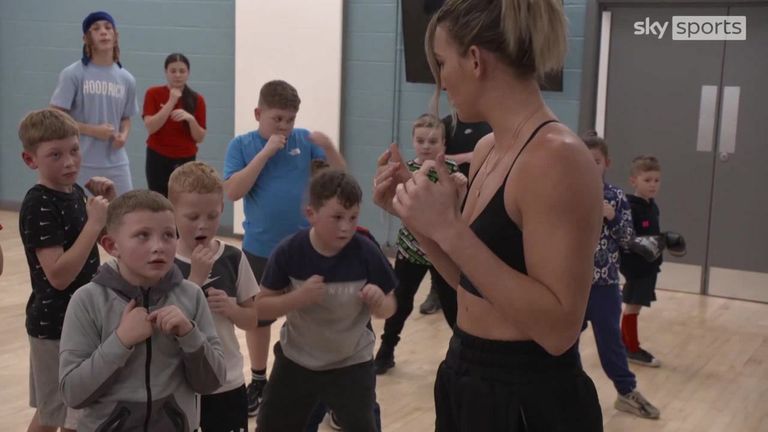 “So, this contract really solidifies I’ve done that, to an extent, and I’ve completed that goal to an extent. There’s a long way to go still with creating equality in this sport and closing that gap, but I couldn’t be happier with this contract.

“I have always enjoyed working with Top Rank, and when I first signed with them five years ago, I knew I had a lot to prove. Every time I stepped into that ring, I fought to show the boxing world that I belonged and that women belonged.

“I plan on continuing that mindset for the next several years as we knock down even more barriers and create an even greater legacy.”