Former England footballer Lianne Sanderson says Black and other ethnic minority candidates are “being blocked” from getting coaching jobs in football and has called on authorities to “give us an opportunity”.

Last month, the Szymanski Report said Black footballers represent 14 per cent of all UEFA Pro Licence holders who have graduated as coaches under the English FA.

Forty-three per cent of Premier League footballers are Black, while just 1.6 per cent of executive, leadership and ownership positions in football are held by Black people.

Sanderson, who was capped 50 times by England, discussed her struggles to get a job in football on The Great Debate on Sky News.

“I think you wouldn’t see someone like myself talking about men’s football around 15 or 20 years ago,” the 34-year-old told Sky News. “And with the platform that I have now [shows] that times are changing.

“There’s enough Black people in the world, there are enough ethnic minorities in the world and Asian people, but there’s not enough Asian footballers that get to where they need to get to. So something isn’t right, because we’re being blocked from somewhere.

“That’s what I think we’re seeing now and people are saying, ‘There’s more people like you on TV, you’re just a token gesture.’ Well no, it’s been like this for hundreds of years where people like me haven’t been on TV, so clearly there was a problem.”

‘I have a hard time with abuse, I don’t even look at my phone’

The three players were victims of abuse on social media after missing penalties in the Wembley defeat to Italy last July, but Sanderson was not surprised by last summer’s events.

“I’ve certainly noticed that allies are a big, big factor in everything we’re doing,” she added. “Because I can sit here and think: ‘I think I tick all the right boxes.’ But I’m a woman, I’m gay and I’m black. And for some people, that’s a lot for them to handle. 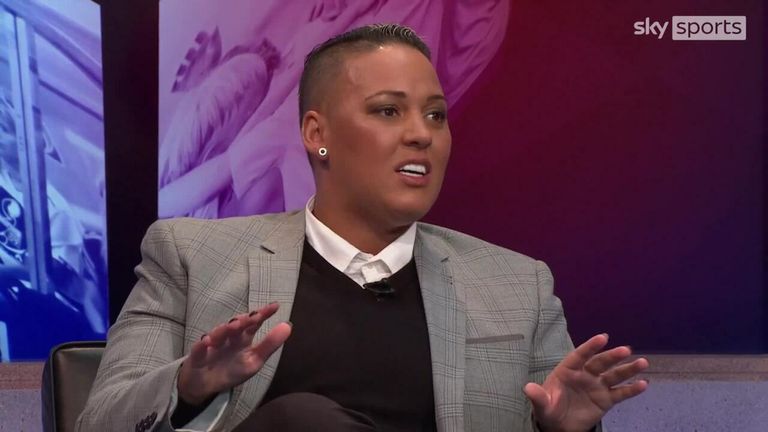 “For people to say ‘racism doesn’t exist in this country’ is beyond me because after the final, when [Marcus] Rashford and Saka were racially abused [on social media with Jadon Sancho], I wasn’t surprised.

Sanderson suggested social media abuse aimed at sportspeople could be reduced by requiring accounts to be accompanied by photo ID.

“A lot of people have said it’s an invasion of privacy for passports or some kind of identification to be shown when people are signing up [for social media],” she added. “I love a love-hate relationship with social media, I think it’s a fantastic way of being able to engage with people.

“But the amount of abuse I get on a daily basis when I go on a male-dominantly followed account – whether it be talkSPORT or Sky Sports News – I don’t even look at my phone anymore during shows. It’s so disappointing to see what people write.

“For me, if I put music up on my social media, it gets taken down straight away because it’s copyright infringement. I even had a video taken down from around five years ago.

“So if they can find that, how can they not stop people from being able to get to you? Footballers are all creatures of habit, they all take a look at their phones after a game.

“I can handle someone telling me, ‘I don’t like you because you’re not a good pundit.’ That’s their opinion. But when it comes to race, sexuality or the colour of your skin or the fact that I’m a woman, those are things that I can’t change. And that’s what I have a hard time with – and I’ve had so much abuse.”