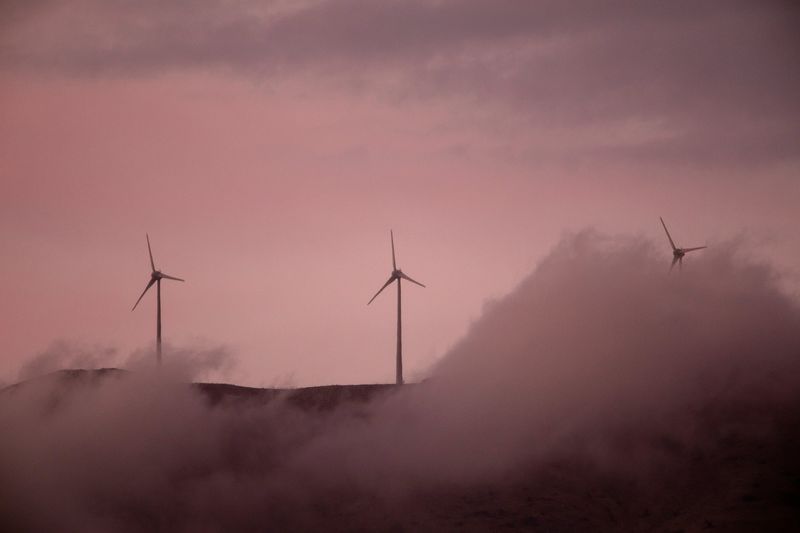 © Reuters. FILE PHOTO: Wind turbines operate atop a mountain during sunset near the town of Kalavrita, Greece, August 15, 2019. REUTERS/Alkis Konstantinidis

ATHENS (Reuters) – Greece said on Monday the European Commission has initially approved its scheme to set a ceiling on wholesale electricity prices and mitigate the impact of soaring energy costs on households and businesses.

With a large share of the country’s power generation mix coming from gas, Athens has been subsidising power and gas bills and has also offered a one-off grant to vulnerable groups at a total cost of 4 billion euros ($4.27 billion) since September.

But surging gas and electricity prices exacerbated by Russia’s Feb. 24 invasion of Ukraine have left Greek consumers with ballooning power bills and prompted Athens to announce a ceiling on wholesale electricity prices from this summer.

“Today, we’ve made a very important step, by initially agreeing on the new mechanism which will take effect in the electricity market from July onwards,” Greek Energy Minister Kostas Skrekas said in a statement, after meeting EU’s energy commissioner, Kadri Simson, in Brussels.

The scheme will include a cap on payments to power producers to reflect their actual production costs, without breaching EU’s common power markets rules, to help disconnect soaring gas prices from electricity prices, the statement said.

Greece will next week notify the European Commission of the draft legislation outlining the new mechanism, the statement added.

Athens has said it will use revenue from its carbon emission permits to finance the scheme.