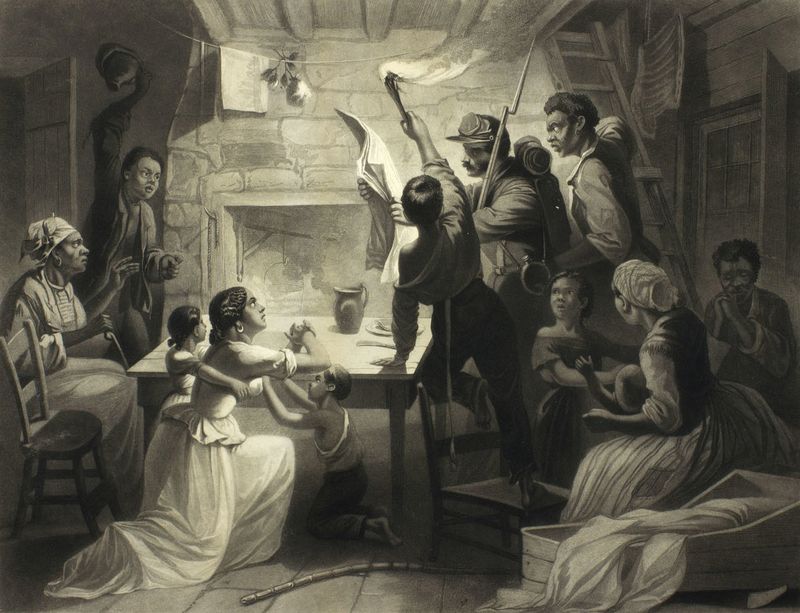 © Reuters. An illustration depicting a white Union soldier reading the Emancipation Proclamation to an enslaved family in their cabin, in an engraving by James W. Watts and modeled after a Henry Walker Herrick painting circa 1864. via Library Company of Philadelphia

(Reuters) – A California task force on reparations recommends limiting any government payments to Black people whose ancestors were in the United States in the 19th century, rather than giving money to all Black people.

After a lengthy debate, the panel in the most populous U.S. state voted 5-4 on Tuesday evening to narrow the qualification for receiving compensation if the state were to create a reparation payment program in the future, local media reported.

The panel is charged with issuing recommendations on possible reparations to California’s legislature by June 2023. It began meeting monthly in June 2021, a year after legislation authorized it to study the issue.

Before the vote, Rev. Amos Brown, president of the San Francisco branch of the NAACP and vice chair of the task force, told fellow members they must set an eligibility definition that reflects political realities in the United States.

“Please, please, please I beg us tonight, take the first step,” he said. “We’ve got to give emergency treatment to where it is needed.”

The conversation around reparations for Black Americans has gained traction in the wake of a national reckoning on racial inequity that followed the police killings of George Floyd and other Black Americans in recent years.

The practicality of implementation has been a matter of debate. Some question whether taxpayers can afford to pay reparations while others question how jurisdictions should determine eligibility for such programs – whether by race, ancestry or evidence of discrimination.

The California task force has yet to determine how potential recipients of reparations would be required to prove their ancestry.

In January, a committee approved the first 16 applicants to receive $25,000 in the city’s reparations housing program. The applicants can use the money for home repairs, down payments or mortgage payments.

Other cities, including Chicago; Providence, Rhode Island; and Burlington, Vermont, have also created committees to look at reparations.