Maxwel Cornet’s late goal moved Burnley a point behind Everton – and safety – with a stunning 3-2 win at Turf Moor which leaves the Toffees deep in the relegation mire.

In a game that could have far-reaching implications on both side’s fortunes, a three points labelled “massive” by fellow goalscorer Jay Rodriguez lifted the Clarets to 18th, just behind Everton, who sit directly above them outside the relegation zone. 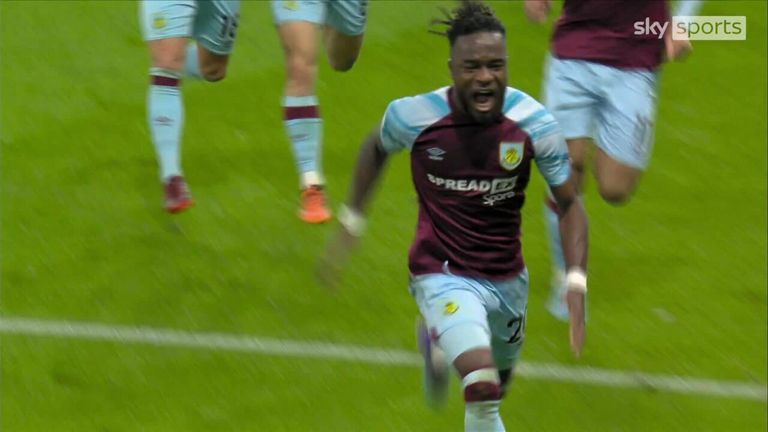 The Clarets enjoyed a dream start as they looked to narrow the gap to safety when Nathan Collins took advantage of some horrendous Everton defending to side-foot home from an early corner.

But when the Toffees were awarded a penalty for Ashley Westwood’s foul on Anthony Gordon, Richarlison’s leveller changed the game’s momentum and a second spot-kick, awarded after a VAR review, was tucked away by the Brazilian four minutes before the break.

He might have had his hat-trick shortly after half-time but was denied by the woodwork moments before Rodriguez fired home Charlie Taylor’s brilliant pull-back to bring the hosts level. 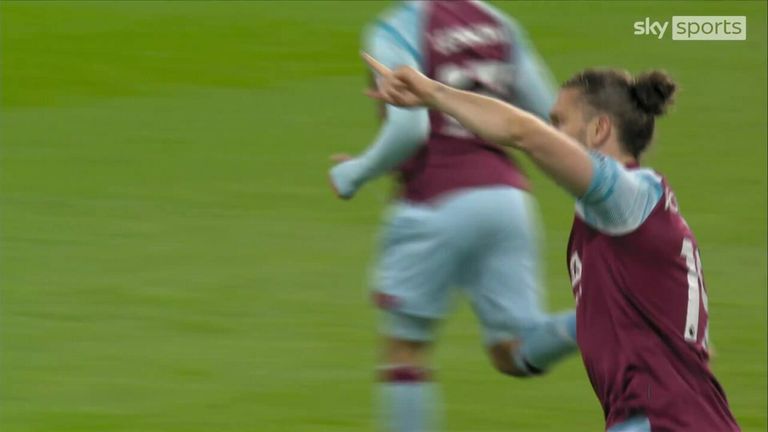 An open tussle ebbed and flowed as both sides tried to find a winner without exposing themselves to defeat, until a miss-kick from Ben Godfrey allowed substitute Matej Vydra to tee up Cornet to earn Burnley a seismic victory – only their fourth of the season – five minutes from time.

After an opening 15 minutes in which they blew their visitors away, Burnley struggled to wrestle back their early dominance in a game where anything but victory would have kept them at least four points from safety.

They made their intentions clear from kick-off with four shots, including Collins’ first goal for the club which came towards the end of a barrage of early corners.

More than 40 per cent of the game had been played in Everton’s third in the opening quarter of an hour, but the hosts’ impetus was sapped suddenly when Gordon went down easily under pressure from Westwood, with Mike Dean pointing straight to the spot and Richarlison equalising from 12 yards. 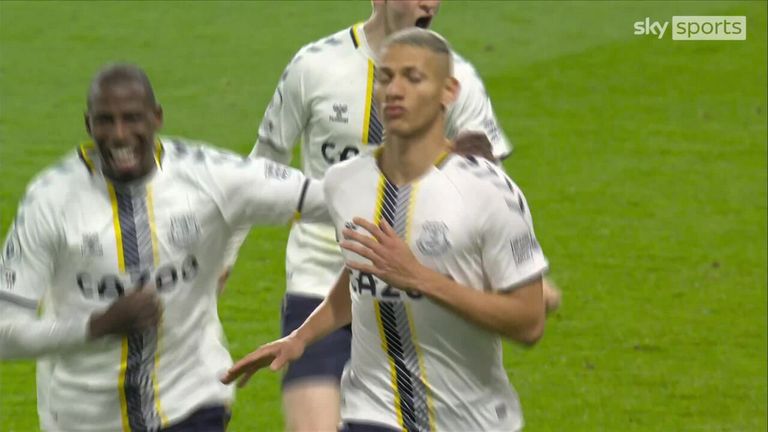 Everton take the lead after VAR intervene to award them a penalty, with Richarlison scoring his second of the game

The Toffees’ second spot-kick was far less debatable but gave the Clarets an uphill task at the break, given they had won only twice, and scored 10 goals, at home all season.

The hosts’ performance after half-time was far from vintage and saw them stretched on the break at times, but a resilience flowed throughout the team, with man of the match James Tarkowski a colossus in defence with both full-backs pushing on. 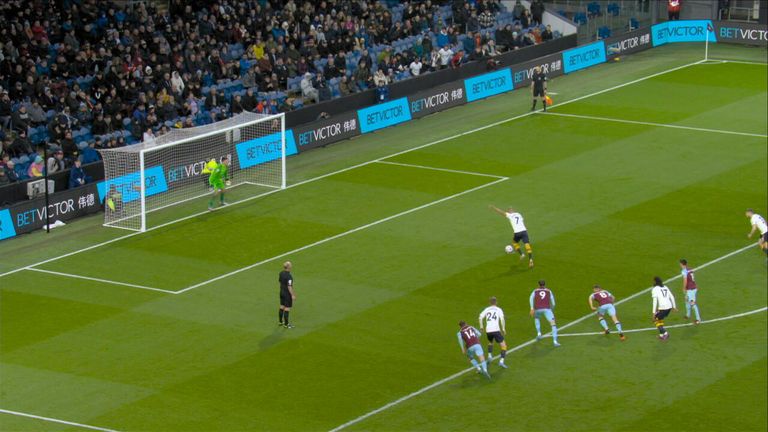 That attacking philosophy is not often associated with Sean Dyche but he told Sky Sports after full-time he had changed the Clarets’ style with Everton’s leaky defence in mind – and his own side’s desperate need for points. “We felt there might be that edge that we could attack them maybe, possibly more freely,” he said.

Left-back Taylor was at the heart of both of their comeback goals, first darting into the box and squaring for Rodriguez to equalise, before another cross was miss-controlled by Godfrey in the build-up to the winner.

“To get one ahead and concede two sloppy goals, we were disappointed,” Rodriguez told Sky Sports after the comeback. “We had to keep calm, show we can play, we’ve got some good players and I think the second half showed that.” 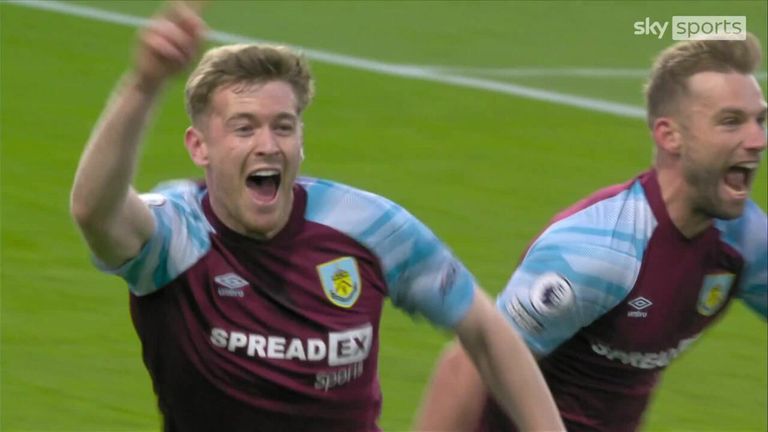 Burnley’s character took them so far, but there was a reason they had failed to score in eight of their home games, and all of their last three, before the visit of Everton.

Frank Lampard cut a stony-faced figure come the full-time whistle, with the knowledge his side had thrown away a precious victory through three basic defensive mistakes.

Sky Sports’ Andy Hinchcliffe labelled Collins’ side-footed opener, a comfortable finish after an untracked run to the back post from a corner, an example of “diabolical defending” and there was little more positivity he could offer about Everton’s efforts to keep out second-half strikes from Rodriguez and Cornet.

Both scorers were unmarked to fire home close-range finishes and drop Everton further into the relegation mire, with the latter’s late winner exasperated by an awful mistake from Godfrey in the build-up.

Concerns about Lampard’s front-foot football given the Toffees’ defensive deficiencies were raised at the time of his appointment but under his leadership they have now conceded 22 goals in 12 games in all competitions, including nine in their last three matches.

“Defensively, again, as at West Ham and in many other games this season, they just make basic defensive errors,” Hinchcliffe said.

“When you don’t stop crosses coming in, you panic when the ball is in the box and you don’t pick their men up, you are going to suffer.

“In this game and certainly the West Ham game, which I was at on Sunday, they did an awful lot right, but they continually miss chances and then defend poorly, so they are not giving themselves a chance of picking up wins.” 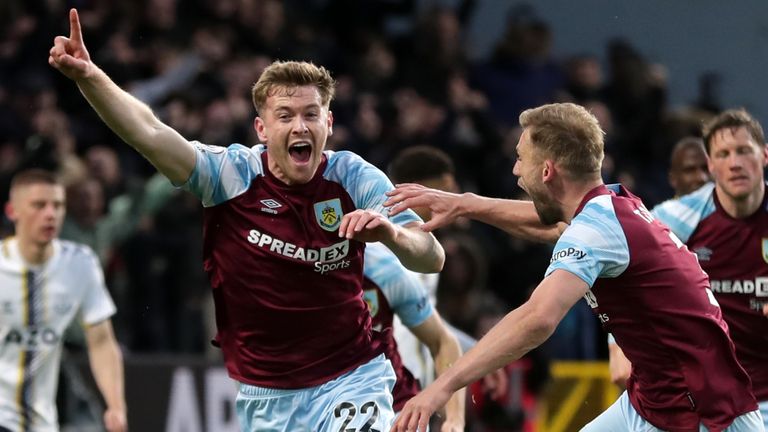 Burnley manager Sean Dyche says it was a very important win against Everton and had told his players to take confidence from their opponents poor away record.

Dyche revealed he told his Burnley players Everton “don’t know how to win” as they plotted their comeback to inflict a seventh defeat in 10 games on the Toffees.

Dyche told Sky Sports: “I’ve been down there, I know what it’s like and every season there have been tough patches for us. It’s hard to explain, but sometimes you sense that a team might have lost how to win a game. I said to them at half time ‘I’m not sure these know how to win a game, away from home particularly’.

“I told them we’ve got to play on that mentality – we do it by playing forward with better quality and being more aggressive in our play. Our passing and trying to get into the front areas of the pitch wasn’t glorious but there were patches and enough patches where we found three goals and I’m pleased with that.

“I think they had taken six points from 42 away from home before this game and conceded 49 over the season so far, so we felt there might be that edge that we could attack them maybe, possibly more freely. I don’t think it was free-flowing, but we had moments that counted, of course, and I reminded them of that at half-time.”

Lampard: We’re no different to other relegation battlers 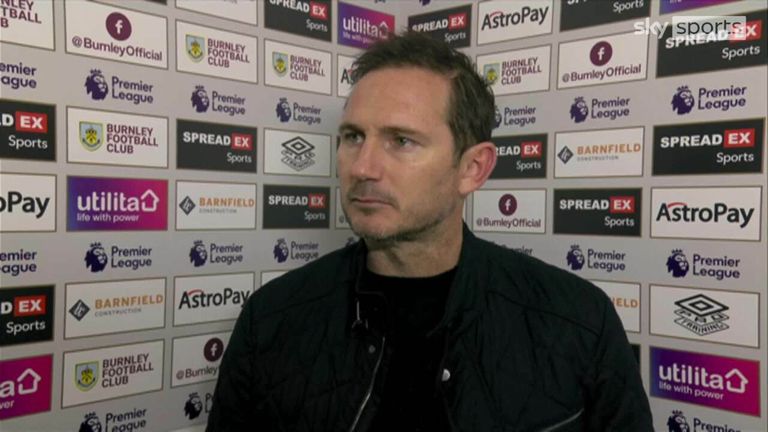 Everton manager Frank Lampard believes his side should have beaten Burnley but were not clinical enough in front of goal.

Lampard said his side should have seen out victory after holding a half-time lead, before adding that the Toffees were in a genuine “battle” to avoid the drop.

Addressing the idea that there was more pressure on Everton than their relegation rivals due to the size, history and relative success of the club, he told Sky Sports: “It feels the same to me, whether that’s true, maybe, but it shouldn’t be in absolute football terms.

“The reality is what it is – we’re not different to Burnley, Watford, Norwich or Leeds. That’s where we’re at as a football club. Players don’t need to listen or read anything other than turning up tomorrow and getting the right results to keep us in this league.

“We can’t control it so there’s no point in delving too much into it, it would’ve been around the club before I was here and will continue until the end of the season. The only thing we can do is to control what we can, which is to work and fight to get the results.

“From 2-1, we should win the game, and by more goals. We’re not clinical enough on the numerous chances, the counter-attacks, and at that point you leave the game open. Then we make mistakes for their goals.

“I’m not sure it matters what it is, but the players have to deal with it. The only way through it is to fight, and keep working. That’s what the players have to do. We are in a battle, if we didn’t know it before, we know it now. We’re still above Burnley in the table, but obviously we’re very disappointed to lose from a winning position.”