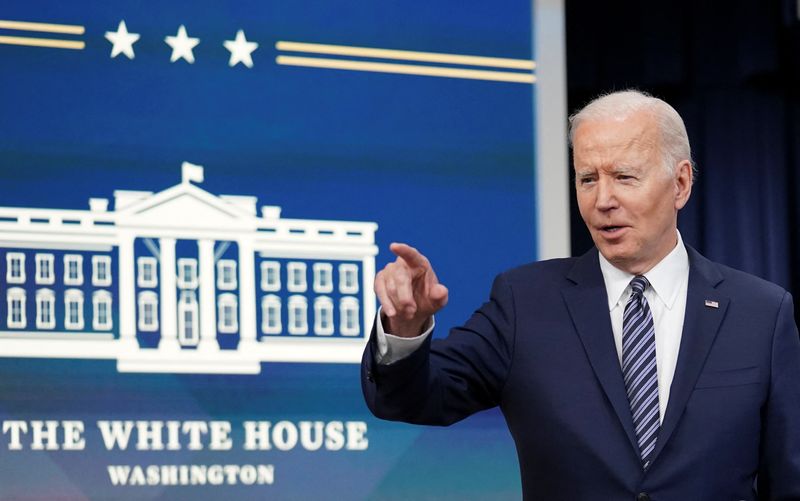 © Reuters. FILE PHOTO: U.S. President Joe Biden takes a question after announcing the release of 1 million barrels of oil per day for the next six months from the U.S. Strategic Petroleum Reserve, as part of administration efforts to lower gasoline prices, at the Wh

By David Shepardson and Nandita Bose

WASHINGTON (Reuters) -President Joe Biden on Monday touted the importance of the U.S. trucking industry especially during the COVID-19 pandemic as the administration has worked to boost the number of truck drivers by drawing in more women and veterans.

Biden called for changes “so we can draw more Americans to work jobs with increased wages, reduced wait times and improved safety and so much more.”

The White House touted actions underway to make it easier to be a truck driver, including making it easier to find a place to park and doing more to strengthen workplace safety and workers’ rights for drivers.

Biden was joined by Transportation Secretary Pete Buttigieg in outlining efforts to remedy long-standing weaknesses stemming from workforce challenges in the trucking industry.

The moves are part of a year-long drive to stiffen U.S. supply chains against climate shocks and geopolitical tension, so as to ensure that China or other nations cannot weaponize the supply of goods.

Biden has focused on rebuilding U.S. supply chains after acute shortages of personal protective equipment, including masks and gloves, at the start of the COVID-19 pandemic, and a dearth of semiconductors that made cars costlier and helped push inflation to 40-year highs.

Biden, speaking in front of three large trucks on the White House lawn, noted truckers move about 70% of all goods in the United States. He noted that average trucker wages have dropped nearly 30% in inflation-adjusted dollars since 1978.

“In this iconic American industry it’s getting harder and harder to raise a family with dignity and pride,” Biden said.

Some carriers must replace 90% of their workers each year, White House figures showed. “It’s no surprise that so many drivers left their jobs,” Biden said.

The American Trucking Associations said last week that weekly driver earnings were up more than 25% for long-haul, truckload drivers since the beginning of 2019.

The plan to boost the numbers of truck drivers, launched in 2021, has swelled hiring, with more commercial driver licenses available in the first two months of this year versus last year’s corresponding period, the statement said.