Scotland surrendered a two-goal lead to draw 2-2 with Austria in an entertaining friendly at the Ernst-Happel-Stadion.

Visiting goalkeeper Craig Gordon kept the hosts at bay before Jack Hendry headed Steve Clarke’s side into the lead after 28 minutes following a corner from John McGinn, who had missed a couple of early opportunities.

The Aston Villa midfielder made no mistake with another chance after 56 minutes, but Michael Gregoritsch pulled a goal back 20 minutes later and – with eight minutes remaining – with the nervy Scots disjointed, fellow substitute Alessandro Schopf levelled, to leave the visitors hanging on for a draw.

After a 1-1 draw with Poland at Hampden Park last Thursday, Scotland have six wins and two draws from their last eight matches and can start looking forward to the World Cup play-off semi-final against Ukraine, pencilled in for June, with Wales awaiting the winners in the final, albeit Clarke will know improvement is required.

There was little appetite for the game in Austria after the hosts’ chances of reaching the 2022 World Cup finals in Qatar were ended by Wales in the play-off semi-final last week. Afterwards Austria manager Franco Foda announced he would be standing down after the game.

As promised, Clarke utilised his squad with captain Andy Robertson, who missed the Poland game due to Covid-19 issues, back in the starting line-up along with centre-back Hendry and midfielders Stuart Armstrong, Ryan Jack and Lewis Ferguson, the latter making his first start.

Austria goalkeeper Daniel Bachmann played under Clarke at Kilmarnock, and he had some early work to do. McGinn had two efforts, first testing Bachmann with a drive in the third minute and then sliding a shot past the far post from 12 yards. However, Gordon made three terrific saves to keep the Scotland goal intact.

The veteran Hearts number one blocked Sasa Kalajdzic’s close-range header from a corner then used his foot to repel a drive from the striker before parrying a powerful drive from Marko Arnautovic. Amid all that, Scotland striker Che Adams had the ball in the net, but the offside flag had long been up.

Scotland did take the lead though, from their first corner, an in-swinging McGinn delivery to the far post. Visiting defender Grant Hanley powered his header against the crossbar but the ball dropped to Hendry, and he gratefully nodded it over the line from a yard out.

The home side continued to threaten however, and Scotland defender Kieran Tierney cleared the danger after Gordon let a pass to Arnautovic go through his legs.

Scotland showed no signs of tightening up in the second half and the increasingly-dominant hosts threatened on several occasions.

However, the Scots produced a moment of class when Robertson and Tierney combined down the left and, when the Arsenal defender’s cut back came fizzing across to McGinn, he fired the ball first time high past Bachmann. Then came the expected raft of substitutes to disrupt the game. 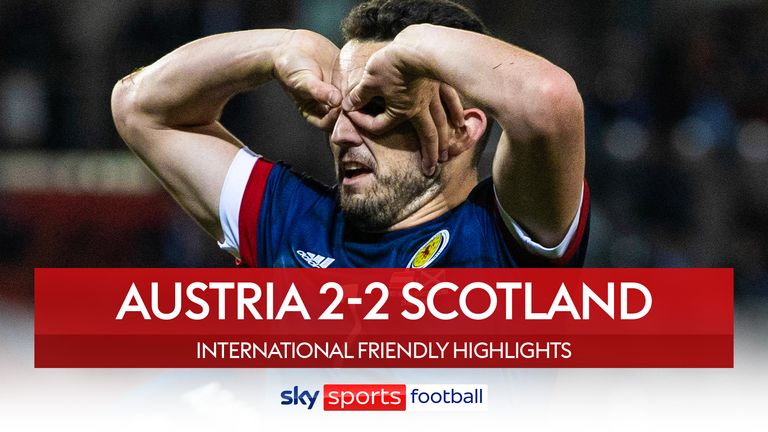 Highlights of the international friendly between Austria and Scotland

Austria kept plugging away and got their rewards just when Gregoritsch came off the bench and climbed above Hanley and Tierney to head in a delightful cross from Andreas Ulmer.

Scotland were pushed back into their own box and there was no real surprise when the home side levelled, Schopf beating Gordon with a low drive from 18 yards.

The Scotland stopper then had to make a save from another Austria substitute Andreas Weimann moments later and – from a strong position – the Scots were happy to hear the final whistle.

Clarke: Scotland ‘in a good place’

Scotland manager Steve Clarke: “It is a difficult place to come. If you said before the game that we would get two goals and a draw, a lot of people would have said that would be OK. Don’t forget, at 2-0 I immediately made three substitutions, so you lose that little bit of rhythm, that little bit of continuity in the game.

“The idea tonight was to get more people on the pitch. You are allowed six subs, I wanted to give some players minutes on the pitch. I don’t understand why the feel-good factor would go. It is eight games unbeaten, and we go in to a competitive programme in June and we are in a good place, don’t worry about that. There is always something you can find in performances to improve on.

“Ball retention could have been better in the game, some decent moments in the first half especially, another good goal off a set play and a fantastic second goal. From the 2-0 position it is always a little bit disappointing when you don’t see the game out with a win but it is a tough place to come. Austria were competitive, they wanted to give their manager a good send off.

“So we will take the draw, go away unbeaten and look forward to competitive games in June on the back of an eight game unbeaten run which is not a bad place to be. My one wish, if we play Ukraine in June, that means the situation in the country would have improved dramatically and that would be great for everyone.”

Scotland set their sights on their postponed World Cup play-off semi-final against Ukraine, scheduled for June, with victory sealing a potential final against Wales for a place at Qatar 2022.