Abramovich appears at Ukraine-Russia talks in Istanbul By Reuters 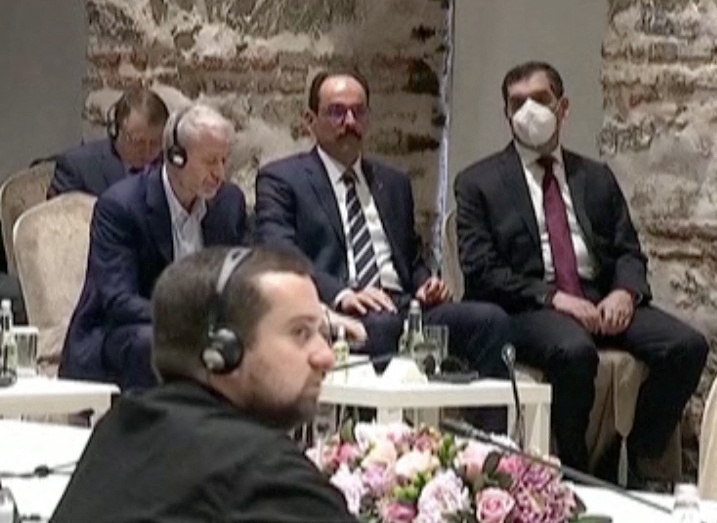 By Yesim Dikmen and Daren Butler

ISTANBUL (Reuters) -Russian billionaire Roman Abramovich, who is sanctioned by the West over Moscow’s invasion of Ukraine, made a surprise appearance in Istanbul on Tuesday at the first direct peace talks in weeks between Russian and Ukrainian negotiators.

The two teams sat facing each other at a long table in the presidential office on an Ottoman palace grounds. The Russian oligarch sat in the front row of observers wearing a blue suit, a Turkish presidential video showed.

In the most tangible sign yet of progress towards ending the war, Russia emerged from the talks promising to scale down military operations around Kyiv and the country’s north, and Ukraine proposed adopting a neutral status.

For Abramovich, signals have emerged since the war began that he has sought to encourage negotiations, and he has travelled to Ukraine, Russia, Turkey and Israel in March. Two of his superyachts are docked at Turkish resorts.

His presence initially baffled at least one Ukrainian diplomat, while Moscow said he was not formally negotiating but rather there as a go-between and had approval from the Ukrainian side.

A spokesman for Abramovich did not respond to a request for comment. Abramovich showed no signs of a reported suspected poisoning early this month.

The Wall Street Journal and investigative outlet Bellingcat, citing people familiar with the matter, said Abramovich and Ukrainian negotiators suffered symptoms of suspected poisoning after a meeting in Kyiv.

Kremlin spokesman Dmitry Peskov dismissed the poisoning reports as untrue and part of an “information war”.

NATO member Turkey shares a maritime border with Ukraine and Russia in the Black Sea, has good ties with both and has offered to mediate the conflict. While calling Moscow’s invasion unacceptable, Ankara has also opposed the Western sanctions.

In a speech ahead of the talks by the Bosphorus strait, Turkish President Tayyip Erdogan told the delegations the time had come for concrete results and that progress would pave the way for a meeting of the countries’ two leaders.

“It is up to the sides to stop this tragedy. Achieving a ceasefire and peace as soon as possible is to the benefit of everyone,” he said.

Footage released by Kyiv showed Ukrainian Defence Minister Oleksii Reznikov being warmly greeted by his Turkish counterpart ahead of the talks at the Dolmabahce palace grounds.

Reznikov, who was not wearing a face mask, joked with Turkish Defence Minister Hulusi Akar that Ukraine had scrapped COVID-19 precautions when Russia invaded.

Commenting on Abramovich’s presence, Ukrainian ambassador to Britain Vadym Prystaiko told the BBC: “I have no idea what Mr Abramovich is claiming or doing. He is not a part of the negotiation team.”

Peskov told reporters on a conference call Abramovich was not an official member of the Russian delegation at the talks, but acknowledged his presence there to “enable certain contacts” between sides.

The Kremlin has said he played an early role in talks but the process was now up to negotiating teams. TV video showed he sat next to Erdogan’s spokesman and adjusted his headphones to listen to the president’s speech.

The West has imposed heavy sanctions on Abramovich and other Russian billionaires, Russian companies and officials, in a bid to force Putin to withdraw from Ukraine.

Abramovich had sought to sell his English soccer club Chelsea, a process that was taken out of his hands by the British government when it blacklisted him.

Superyachts linked to him, together worth an estimated $1.2 billion, have been docked at Bodrum and Marmaris in southwest Turkey since last week. Sources have said he and other wealthy Russians were looking to invest in Turkey given sanctions elsewhere.

Its potential as a safe haven for Russian investment raises risks for Turkey’s government, banks and businesses that could face penalties if the United States and others pressure Moscow with broader “secondary” sanctions.